The Liberal Democrats are proposing some key amendments to this year’s budget which will be determined by West Northamptonshire Council this week Service investment proposal equates to £1.7 million which is, in effect, a drop in the ocean to make real service improvements.

“The Conservatives will do their best to keep talking about a fresh start and moving on, but we simply have to remember that the council finds itself in this position due to the historic, catastrophic failure of Northamptonshire Country Council on the Conservatives’ watch. What’s more, we are seeing on a national level, shameful waste with £4.7 billion in bad loans being written off, £9 billion wasted on poor PPE acquisition deals and £37 billion on a track and trace system which cost more than 30 times that of Germany’s. Imagine the benefits that money like this could do if it was to cascade down to councils.” 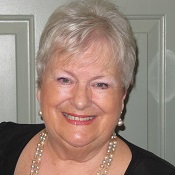 Liberal Democrats are calling for further investment in several priority areas including children’s services, climate change initiatives, investment in training and education to prevent violence against women and girls, as well as fixing the costs of country park parking fees.

West Northamptonshire Council has said it wants to become Carbon Neutral by 2030. But campaigners say to make this happen, so-called "hidden" investments into fossil fuels by the Council must be stopped as soon as possible. We should not be destroying the planet to fund future pensions as well as making sure that investments on behalf of future staff pensions are secure and sustainable. 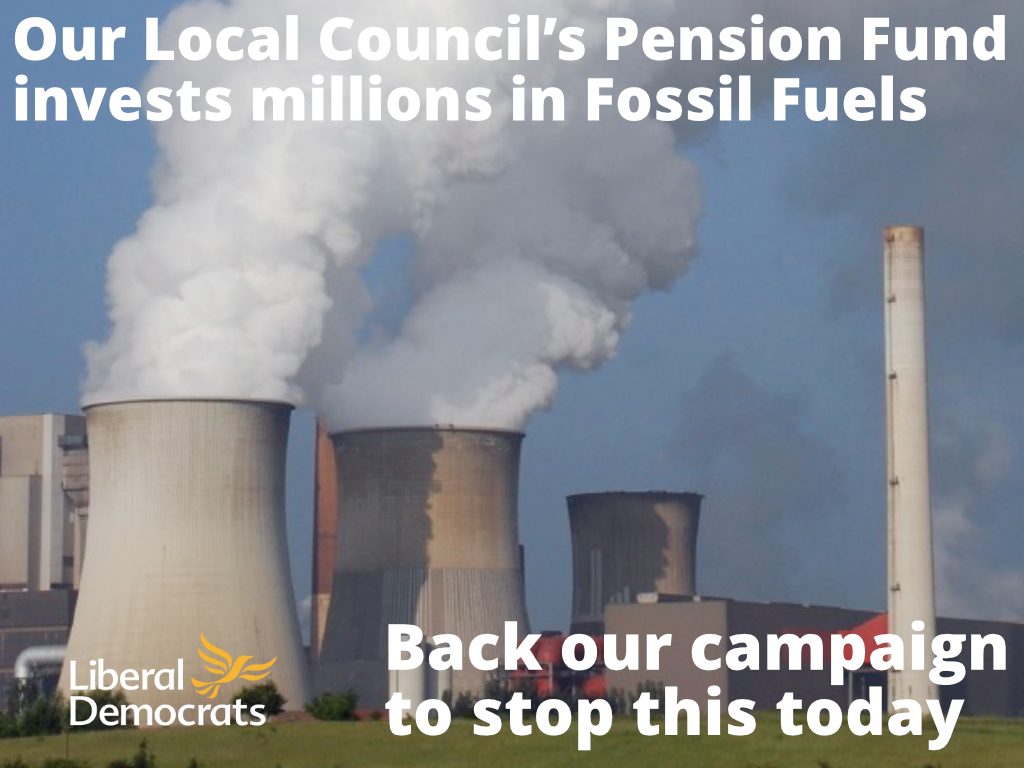 At Thursday’s full Council meeting of West Northamptonshire, the Conservative group appear to have been whipped to defeat a motion by the Liberal Democrats to recognise and support the White Ribbon Campaign. The White Ribbon Campaign was founded by a group of men over fifteen years ago and it encourages men to make a promise to never commit, excuse or remain silent about male violence against women.

The motion called upon all councillors, and especially all male councillors, to make the promise and for West Northants Council to become accredited under the scheme, providing training and encouraging its own male employees to make the promise also. It further asked that the council organises fundraising for the cause aligned to coincide with International Day for the Elimination of Violence against Women on the 25th November.

Councillor Jonathan Harris, Liberal Democrat Councillor for the Brixworth Ward who moved the motion said;
‘I am angered, appalled and quite frankly shocked that the Conservative group saw fit not to support this motion. The poor excuses were that it was “out dated language” and unequal as it didn’t refer to violence and abuse of men. The epidemic of violence, as described by Zoe Billingham, Her Majesty’s Inspector of Constabulary, is violence by men against women and girls. Between last year’s International Women’s Day and this year’s, 180 women have been killed at the hands of men across the country.

It is a fact that generally men still hold more positions in the public domain. Therefore men have a special responsibility to stand up in support of laws to protect women and girls. To hear one male councillor describe the motion as ‘vile’ beggars belief. What’s more, the motion had been in circulation to all groups at least three weeks before the council meeting and to receive a call from a cabinet member, who asked us to withdraw it two days before the meeting, is out of order. I was advised that the Conservatives apparently agreed with the sentiment but not the wording of the motion; well it was their job to offer an amendment to the motion to see if agreement could be made but despite there being plenty of time to do this, there was no attempt to find a compromise’. 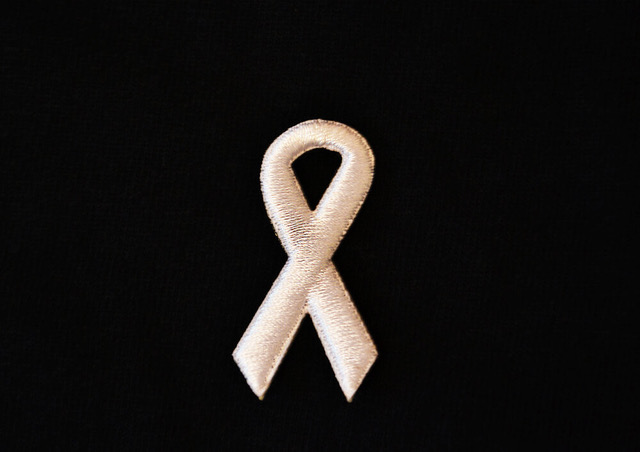 Posted by Paul Schofield | Updated 2021-09-18
Talavera Ward now has 2 Lib Dem Town Councillors.
New Councillor Jackie Fuchshuber is seen her with long standing councillor Dennis Meredith.
The count at Blackthorn Good Neighbours centre was very tense but happy faces finally.
Next day she was in town, signing papers and getting a an early introduction to the job and Jackie wishes to say a big THANK YOU! to those who supported her or who helped the campaign 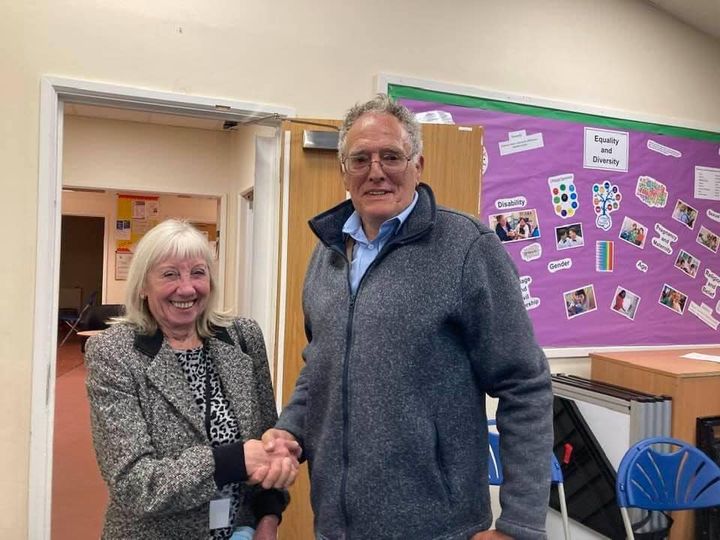 First result to be declared on Friday’s count at Silverstone was Dennis Meredith winning in Talavera before eyes turned to the ward of Towcester and Roade where the numbers were looking incredibly close. Lisa Samiotis won but the national picture saw a disappointment: David Tarbun pipped to the post by only a handful of Conservative votes. The next Lib Dem win was Rosie Humphreys in Braunston and Crick, the first ever win in the Daventry area for the party at this council level. This was followed by Sally Beardsworth topping the poll in Kingsthorpe South. The long count ended on a high on Friday evening with Jonathan Harris winning in Brixworth to take the seat of the former Conservative Leader of Daventry District Council.

Despite the Conservative financial and service provision failures at the old councils, the national picture helped secure victory for enough Conservative councillors to run the new West Northamptonshire council. Labour failed to break through seeing some long time Labour areas turn blue in the vote and the Greens did not win any seats.

What can be done about the dire state of local roads was the topic of discussion on Daventry Radio on Sunday.  “I live on the Northants and Warwickshire border,” said guest Andrew Simpson, “and when you drive on the same road from Northamptonshire into Warwickshire you can see straight away that the road in Warwickshire is in a better state.”

“It would be more cost effective to address road problems in advance when you know you will need to, rather than wait for problems,” Malcolm Simms speaking on behalf of the Asphalt Industry Alliance to Daventry Radio said. He added, “ We need £1.5 billion per year over the next ten years, so £15 billion in total, to get roads in the UK where we would like them.”

How much it will cost the new council of West Northamptonshire to deal with its backlog of road repairs is estimated in the tens of millions. With a local Conservative councillor telling the radio show that there are “about 30 roads within half a mile of where I live” that need resurfacing, it is clear that the problem is much greater than just filling in a few potholes. 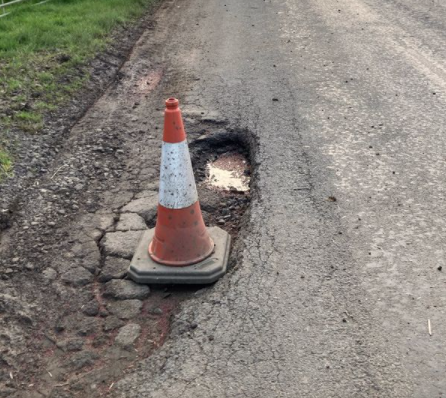 AN HISTORIC DAY FOR NORTHAMPTONSHIRE OR JUST REARRANGING THE DECK CHAIRS ON THE TITANIC?

Cllr Chris Lofts, who worked for 35 years in local government followed by 12 years as a Liberal Democrat councillor, spoke to BBC Northampton this afternoon and was asked what the future might hold. His biggest fear that while the councils might be new, Northamptonshire’s problems haven’t changed and people are suffering from chronically underfunded services. “The role of a council isn’t to be a business,” said Chris Lofts. “It is there to provide a service and most of all, look after the vulnerable.”

Posted by Paul Schofield | Updated 2021-03-09
The Conservatives, while only having 1% to offer nurses, have pushed through an inflation busting 5.9% rise in Council Tax from April for residents in Daventry district and 5.3% for residents in South Northants. Coming with this extra Council Tax is no improvements to local services that under the Conservatives have suffered years of cuts.
Liberal Democrat Councillor Lisa Samiotis says: “Following the failures and repeated mismanagement by the Tories, a new council takes over in April. However, this budget continues down the well-trod Tory path of inadequate local services and now, higher taxes.
Liberal Democrats proposed a fully costed alternative budget that would have seen a lower rise in Council Tax, as well as being able to ring fence £1 million into climate emergency initiatives.
Watch our nice little video
Read more

Posted by Paul Schofield | Updated 2021-03-05
The scandal of the 'lost' (or stolen) £10.25 million lent to the Cobblers rumbles on with questions raised in the House of Lords.
The Conservative administration lent the money without any security even though a previous Lib Dem administration had determined the Club (at that time, it is now under new ownership) was too high a risk for an unsecured loan and that they did not have sufficient assets to guarantee any loan.
As the BBC article reminds us, The Northampton South Conservative Association then received some £37,000 in donations from people associated with the developers. Strange that!!
This was a major failure of the administration's duty of care for public money.
They simply cannot be trusted.
bbc.co.uk/.../uk-england-northamptonshire...

Posted by Paul Schofield | Updated 2021-02-22
Liberal Democrat Councillors will propose at the meeting of the West Northamptonshire Shadow Executive on 23rd February 2021 that average council tax rises across the district should be at 3.99%, a fifth less than the proposed rises of 4.99% on the table from the Conservatives.
“The choice to impose the maximum possible Council Tax increase has been made not because it is needed for in-year spending, but to rebuild contingencies and reserves. It is wrong to penalise current tax payers for the failings of previous Conservative Leaders to balance their books,” Councillor Mark Allen will say at the meeting. “The suggested approach of averaging Council Tax rises hides the real impact on both Daventry and South Northamptonshire. As these areas have lower current tax rates residents will see substantial increases for years to come. Daventry residents will suffer nearly 6% annual increases and South Northamptonshire residents over 5%.” 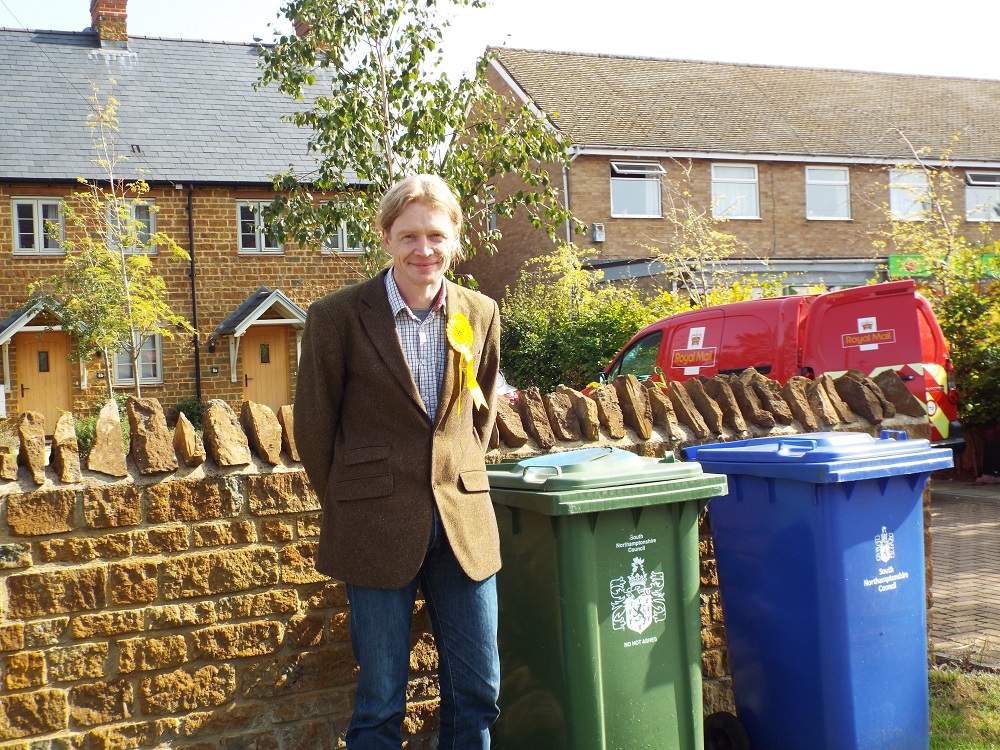 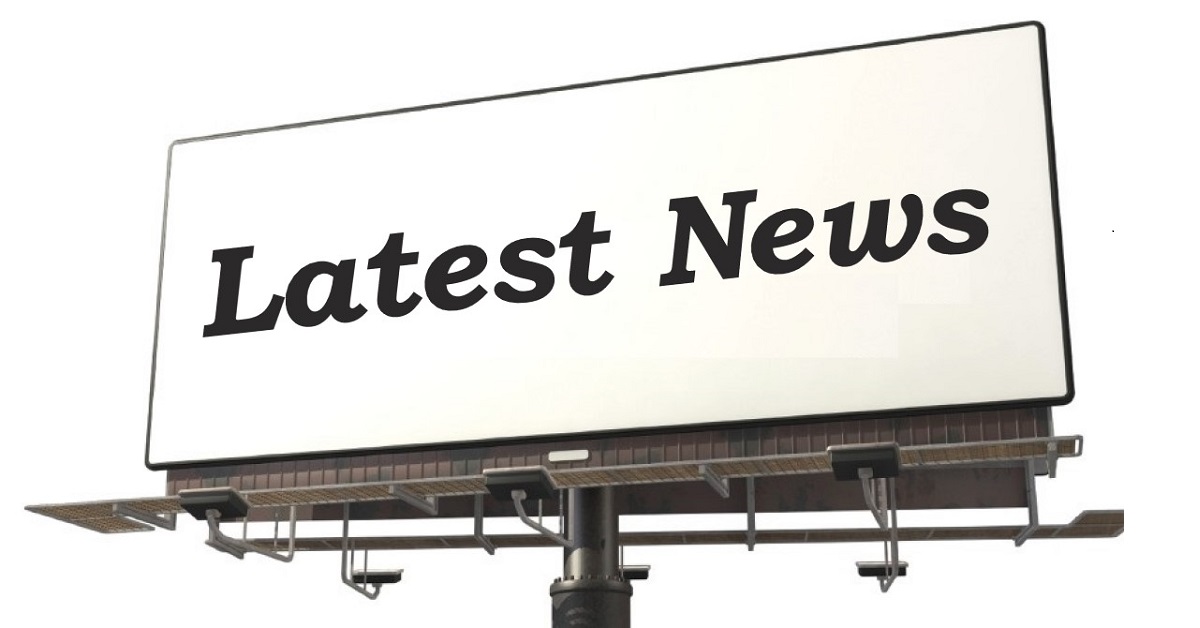 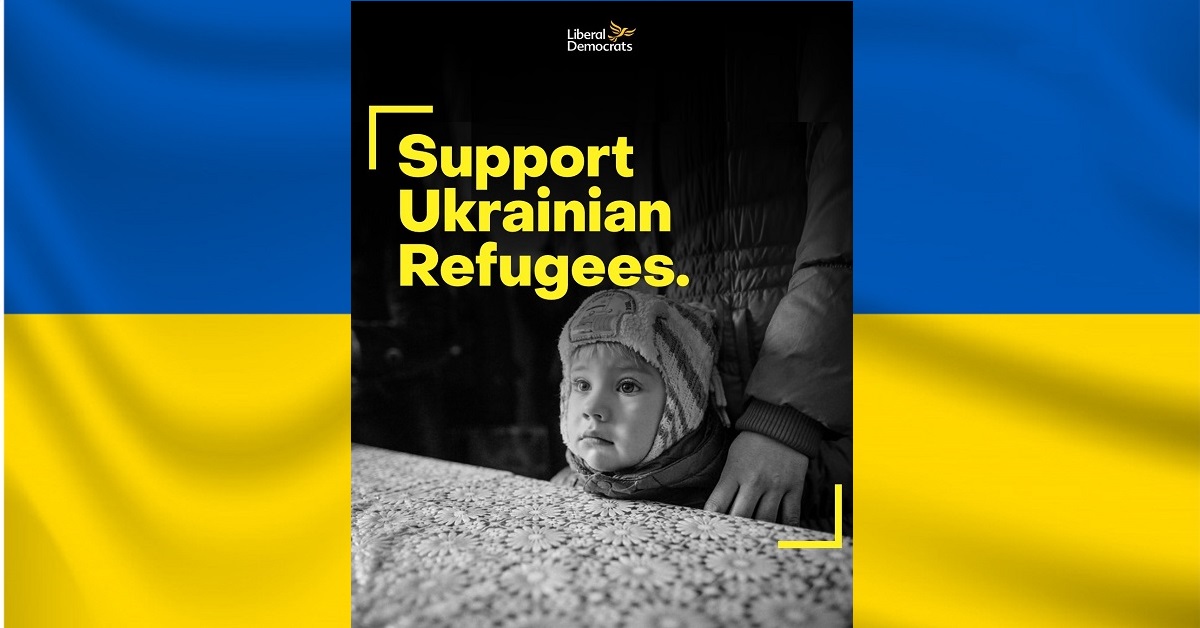 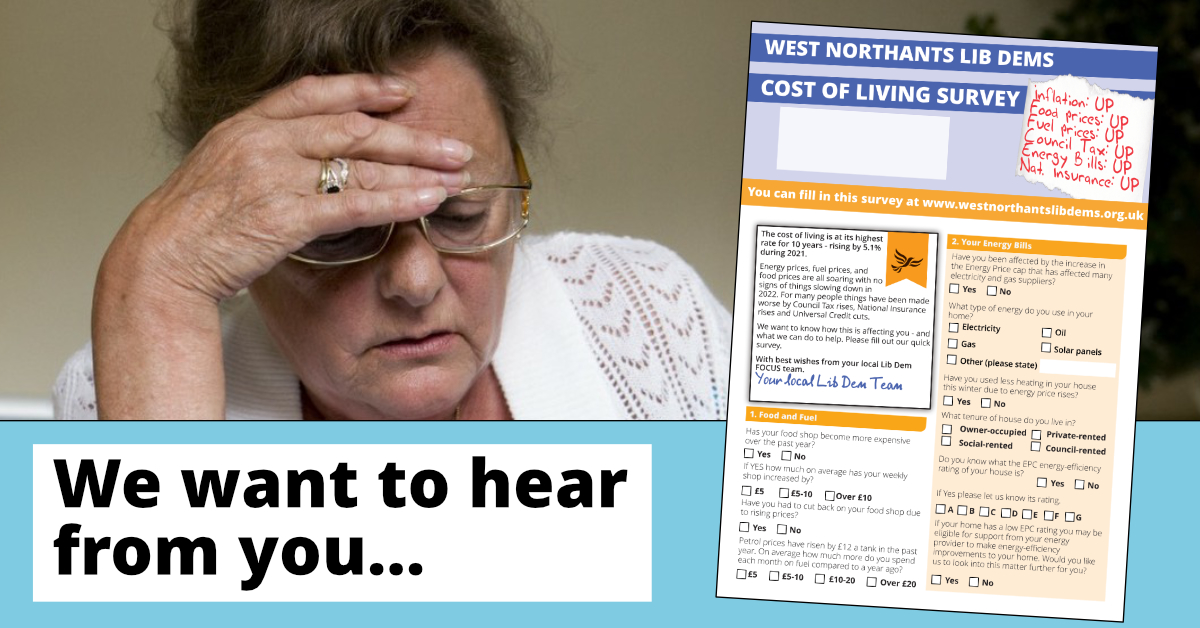 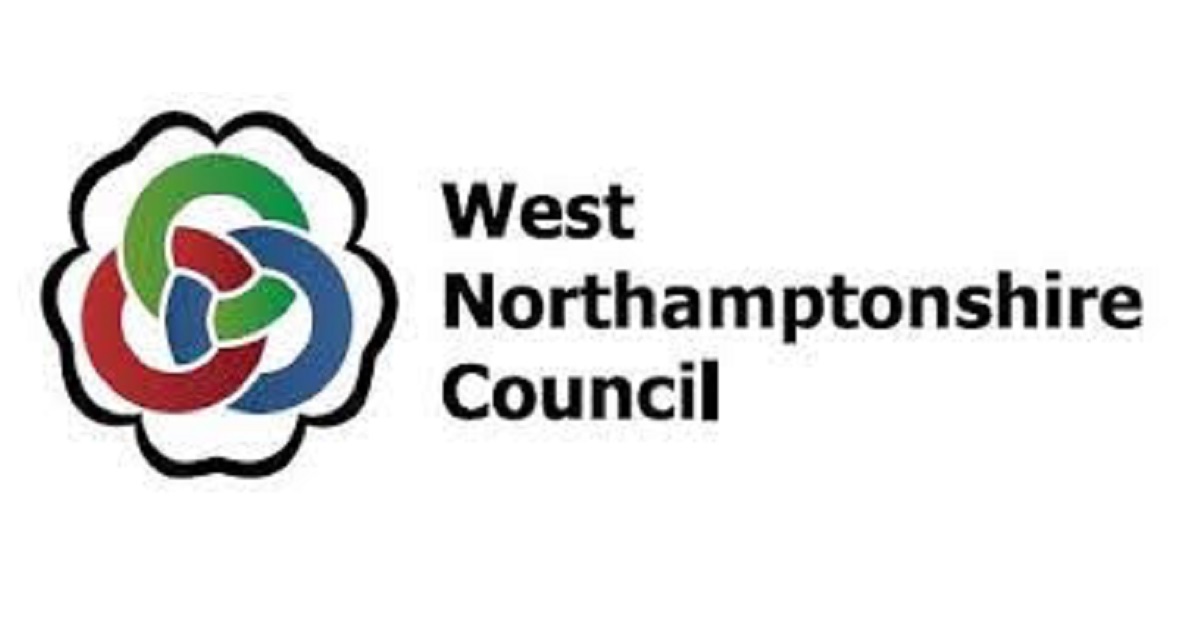 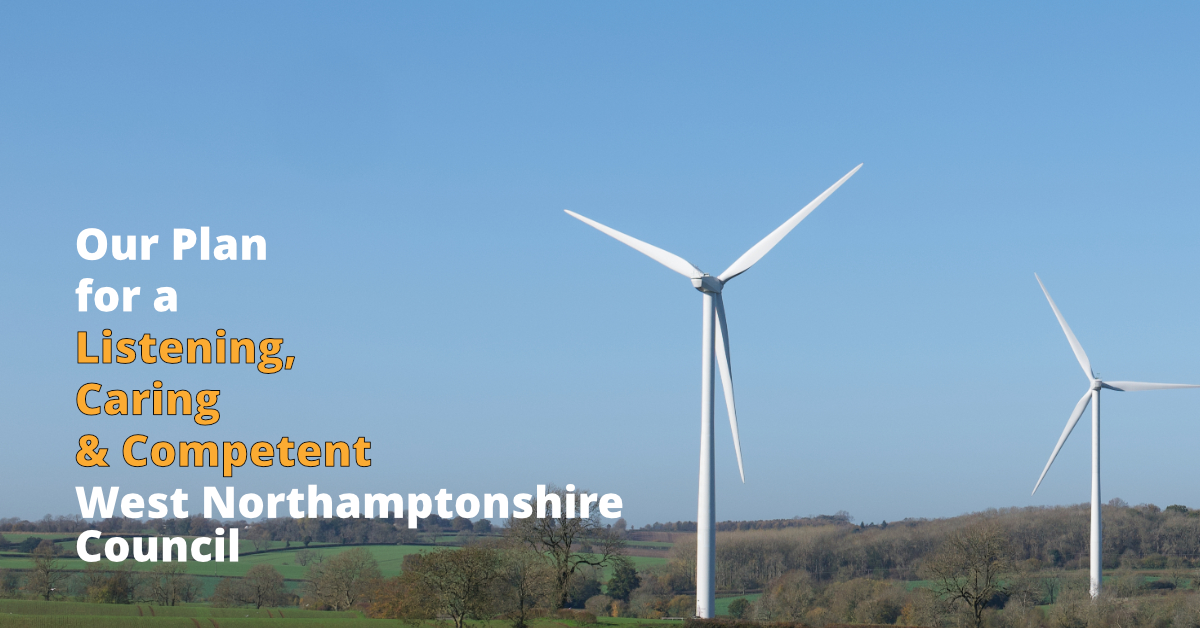